Created 21-Sep-12
Modified 21-Sep-12
Visitors 32
8 photos
Dacre is a small village near to Pooley Bridge and Penrith in the northern Lake District of the UK. The church is interesting in its own right, but in the churchyard are four carved stone bears.

"Archaeological evidence from excavations in 1929, 1982 and 1984 support the view that the church is built on the site of the monastery mentioned by Bede. Bishop Nicolson, writing in 1704, linked the bears to the chained bear and ragged staff o­n the arms of the Earls of Warwick. But these two emblems were not actually linked until the medieval age and the church and bears are much older In 1890 Chancellor Ferguson studied the bears closely and thought he had solved the mystery. He surmised that they were a humorous rendering of a bear legend and told the following story. 1. North West Corner - The bear is asleep with his head resting o­n top of a pillar. 2. South West Corner - A small cat like animal has jumped o­n the bear's back. The bear's head is turned to the right, trying to see what has happened. 3. South East Corner - The bear fights with and attempts to dislodge the animal. 4. North East Corner - The bear is alone, with a wide smile o­n its face, it appears to have eaten the animal and looks extremely satisfied". For more information SEE http:/​/​www.​visitcumbria.​com/​pen/​dacre-​st-​andrews-​church.​htm from which this account is quoted.

The bears are still being actively researched and it has been suggested that (assuming the story as outlined to be correct) is that the bear is intended as a reminder to neo-Christians that the old order, the Celtic ‘warrior’ bear possibly a local tribal leader) is only slumbering and can re-awaken at any time and assail his enemies. The date of the bears is unknown. KH 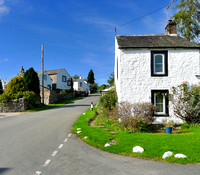