Visitors 220
17 photos
The Hoffman limekiln was built in 1873 for the Craven Lime Company. The kiln allowed lime to be produced on a continuous basis. Hoffman kilns were also used for brickmaking. Click on Gallery keyword hoffman to find other kilns in the UK.

The Hoffman Continuous Kiln was invented and patented by German inventor Friedrich Hoffman in 1858. The Langcliffe kiln was extremely large having 22 chambers where limestone was continuously burned. The limestone was burned in a circuit which took around six weeks to complete one circuit. The lime kiln and quarry closed in 1931 as a result of a fall in sales and competition from elsewhere. The kiln was fired up again in 1937 for two years and closed permanently in 1939. Arrangements to demolish the chimney in 1951 were halted when it fell down the day before the arranged date. There was a much smaller Hoffman kiln at Trowbarrow quarry near Silverdale, but all traces have now gone.
The information is partly abridged from http:/​/​www.​cravenmuseum.​org/​archaeology/​fact-​sheets/​the-​hoffmann-​kiln/​ The Craven Museum has further information and is well-worth a visit.
Categories & Keywords
Category:
Subcategory:
Subcategory Detail:
Keywords:craven lime company, hoffman kiln, industrial archaeology, industrial history, kilns, langcliffe, lime, limestone, limestone, quarries, quarrying, settle, yorkshire dales
© Heritage Photo Archive & Heritage Image Register 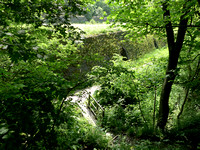